“I wrote ‘superhuman’ when I was 8 months pregnant. I really felt like I was in a space where I was seeking positivity and light for my little one who was about to arrive. This song quickly became a poem about encouragement and knowing you have the strength to continue on no matter what comes your way.”

Bishop Briggs is known for emotional and cathartic songs that blur the boundaries between alternative, pop, and electronic. Born in London to Scottish parents, Bishop grew up in Japan and Hong Kong. Days after graduating high school, she moved to Los Angeles where, after years of performing at any venue that would have her, she was discovered in a small hole-in-the-wall by a former-A&R rep and the rest was history. The music of Bishop Briggs transcends the limitations of singular genres, blending folk, pop and electronic music into a wholly unique sound. Her debut track “Wild Horses” reached #1 on Spotify’s US Viral Chart and #2 on Spotify’s Global Viral 50 charts, with airplay on Sirius XM’s Alt Nation, Zane Lowe’s Beats 1 Show and a prized spot in Acura’s 2016 TLX and ESPN’s NFL Playoffs ads. She followed up with the RIAA-certified platinum single, “River,” a searing and cathartic track that captured the attention of tastemakers and gatekeepers and rose to #3 on the Alternative chart with over 680 million global streams while Bishop’s videos have 524M overall views on YouTube and she has 1 million YouTube subscribers. After her critically acclaimed albums “Church of Scars” and “Champion”, headline tours, live performance slots opening for Coldplay, Kaleo, alt-J, and Bleachers, and with more music on the way, Bishop Briggs is set to have her most incredible year yet. It began with the double dose of emotion on the 2022 singles “High Water” and “Art of Survival.” She parlayed this energy into “REVOLUTION,” which graced the Soundtrack for NHL 23. Continuing a banner year, she also served up “Lessons of the Fire” as the lead track for the smash NETFLIX series Devil In Ohio. With new single “superhuman” and more music on the way, Bishop ignites her most fearless, focused, and fiery era yet.

Once again, Bishop delivers an uplifting anthem highlighted by her dynamic vocals and a powerful affirmation on the hook where she assures, “You’re superhuman. Bulletproof as can be. I know the truth is you can do anything.” She encodes a thoughtful message within the music and lyrics. Fittingly, the song soundtracks the ‘Rise To’ campaign by Rise – an initiative of Schmidt Futures and The Rhodes Trust that finds brilliant young people who need opportunity and supports them for life as they work to serve others. The integrated campaign invites global talent to apply to Rise as they continue to turn opportunities into action and ‘Rise To’ solve the world’s most pressing issues. For more information, please go to https://www.risefortheworld.org/ 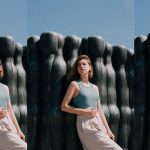